The filtration end use is the fifth largest (in tonnage) of the nonwoven segments, consuming 9% of the world’s nonwovens production in 2018, and one of three end uses that will increase their relative share through the forecast period, with filtration rising to 10% of nonwovens production by 2023 (Figure 1). The filtration market is also the most diversified of all the nonwoven end-use categories tracked by INDA, with 44 categories.

There are numerous drivers affecting nonwoven filter media demand, though the over-arching megatrends would be the demands for purer air and cleaner water, which are both the subjects of ever-more stringent legislation. The market for nonwovens in filtration media is also growing — due to nonwoven media being more economical and better performing — by taking share from woven and paper-based filter media. 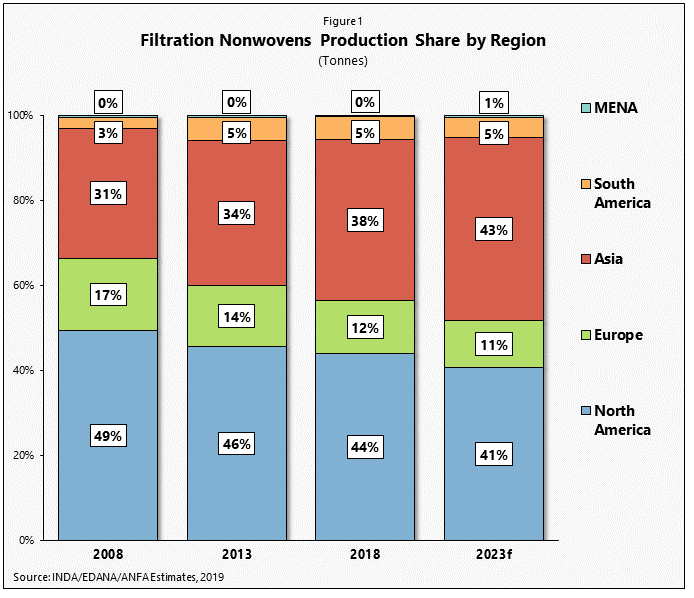 Over the last few years, there has been a steadily increasing demand for improved air quality, particularly indoors, whether in private, public or industrial areas. Emissions may come from a variety of sources, such as gases from interior materials, particles which enter a room via the external air supply or processes running within the room. Further complicating factors may be the small size of a room, too many people in the room and the restricted availability of fresh air.

Consumers are increasingly aware of the potential health and aesthetic benefits of water and air treatment systems and are becoming more willing to invest in these products to improve the environment inside their homes. Media reports about water and air contamination affect consumer perception about local water or air quality and thereby drive sales.

Economic and population growth will increase demand, which will require increased production and increases in manufacturing efficiency for industrial products, foods and beverages, and transportation, all of which means an increased need for filtration media. Rising home sales will also drive sales, since many consumers purchase or upgrade water and air treatment systems once they move into a new home. As the economy strengthens, consumers should return to replacing their existing filter products closer to the recommended replacement periods. Continued trends toward the incorporation of “smart” features and complementary monitoring devices indicating filter replacement time and toward specialized, industry-specific filtration media will support unit growth.

These drivers and developments have resulted in the nonwoven filtration market consuming an ever-greater amount of nonwoven material, reaching 1.3 million tonnes in 2018, an annual increase of 7.5% from 2008.

Much of the filtration market demand is based upon replacement; that is, filters are changed after a useful service life. This feature is a factor across the consumer, commercial and industrial filtration markets, though it is in the consumer end uses, that given tighter economic times, consumers may have used filtration products past their useful life in order to save money. The Internet of Things (IoT), which increases the ability to electronically receive and monitor information on filter efficiency, should result in filter replacement based on need, as opposed to a time-based schedule, which can be overlooked, particularly in consumer scenarios.

These drivers and developments have resulted in the nonwoven filtration market consuming an ever-greater amount of nonwoven material, reaching 1.3 million tonnes in 2018, an annual increase of 7.5% from 2008. Asia was one of the fastest growing regions, rising 9.7% annually in the same period, led by China’s 11.0% annual growth.  As with many of the end uses, the material produced in Asia is not all consumed in Asia, so while some of the growth rates in a region may look slow (or large), that number does not take into account imports (or exports) and actual consumption in the region. By 2023 the nonwoven filtration end use will consume an additional 465,000 tonnes reaching 1.8 million tonnes, a 6.2% annual growth rate (Figure 2). 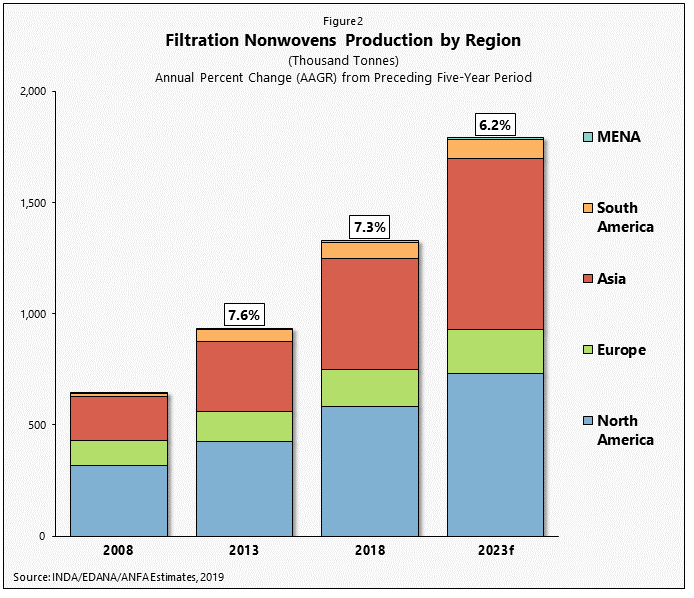 In 2008, North American accounted for nearly half (49%) of the world’s nonwoven filter media production, followed Asia (31%) and Greater Europe (17%). Unlike some of the other nonwoven end use categories, while Asia’s production has grown, it has not captured a significant amount of the production share. Asia’s share increased to 38% in 2018, while North America’s dropped to 44% by 2018. By 2023 the Asia region is forecast to have the largest share in nonwoven filter media production, rising to 43% (Figure 1).

Further, in the emerging and developing markets, as personal income levels rise, residents will spend more on their personal health, leading to more home water and air purification equipment purchases. The aftermarket for filters will also benefit from more widespread knowledge about health and the need to replace filters more often.

Nonwoven producers continually work to improve the efficiency (ratio of particles trapped by media over total particles upstream of media) of filter media, which enhances the removal capability of both particulate and chemical contaminants. This has resulted in filter manufacturers increasing the range of spunlaid nonwoven materials, incorporating nanofiber layers or coatings, using fibers with integrated functional additives in nonwoven filter constructions, and developing hybrid fiber/material composite materials—all while optimizing the media structure and element configuration by computational modeling. In the filter system, the greatest potential for innovation is in the media.

Material for this article is based on research published in “The Worldwide Outlook for the Nonwoven Industry 2018-2023” report by INDA & EDANA.

* International Filtration News is owned by INDA, Association of the Nonwoven Fabrics Industry. 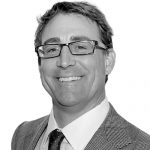 Brad Kalil is director of market intelligence and economic insights, INDA, Association of the Nonwoven Fabrics Industry. He is responsible for providing industry thought-leadership through the gathering, analysis and dissemination of market information and industry reports for INDA. He is the author or co-author of INDA’s biennial Industry Outlook reports on North America and the Global Nonwovens Industry, in addition to authoring the annual North American Nonwovens Supply Report and quarterly Market Pulse. He can be reached at bkalil@inda.org or +1 919 459-3734.

Threats & Opportunities Your Filtration Business to Contend with in 2023

The future of filtration — How does COVID-19 change the filtration industry?

Monadnock touts medical facemask material for use against coronavirus