The interior of an airplane is perhaps one of the safest places to be when it comes to avoiding contamination from a virus like COVID-19.

This is one of the surprising findings arising from detailed studies of recent so-called “super spreader” events in combination with computational fluid dynamics (CFD) modeling.

Together, they highlight the need for a new approach to advanced filtration in confined spaces, says Paul Bemis, CEO of CoolSim and Air Cleaning, Inc., based in Concord, New Hampshire, the  developer of CoolSim, a leading cleanroom and data center software.

“When people realize the power of modeling airflow, they’ll understand how simple and valuable it is in keeping everyone safe from COVID-19 or any other airborne illness,” he says. “We’ve been doing this forever for cleanrooms, to avoid even the smallest particulates, and for data centers to manage energy use, but now we can help model how to manage what could be a life-or-death situation – the reopening of common spaces such as offices, restaurants and public buildings.”

Bemis has now developed a small, low cost and portable HEPA (high-efficiency particulate air) filtration device – the Covid Air Curtain – and can prove it can be even more effective than social distancing at limiting the spread of COVID-19, or of vaccinating around 60 percent of the population.

The first case of COVID-19 in Canada was linked to air travel by an infected individual flying from Wuhan to Toronto. There were 350 passengers onboard the 15-hour flight and the number of passengers who were infected during it was zero.

“As we emerge from lockdown, strategically positioned filter systems could have a huge impact, especially for small businesses such as restaurants or pubs where space is limited,” Bemis says. “Not a lot of work has been done so far on examining the impact of air conditioning systems on the spread of coronavirus contamination, but if you start to look at the super spreader events, ventilation and airflow issues come up time and again.”

The current model of disease transmission, which is informing advice on social distancing, he explains, is based on science of the 1930s, with the work of William F. Wells on tuberculosis.

“Wells basically categorized transmission based on the size of the particles coming out of a sneeze or a cough, for example and he had a cut off of five to ten micrometers,” Bemis says. “That’s really where we get the guidance today on distances, so the current science on this is fairly old.”

Recent work by Lydia Bourouiba at MIT and others, however, has revealed that coughs and sneezes are really multi-phased, turbulent gases which are very influenced by the environment they’re in. Moist or warm air and humidity affect them dramatically, and the lifetime of a droplet can be from a fraction of a second to minutes. The distance can extend from 23 to 27 feet based on the turbulence and the speed of the gas cloud. Exit velocities during a sneeze can run as high as a hundred feet per second and are also influenced by temperature, humidity and airflow. Once evaporated, the nuclei can remain in the air for hours. 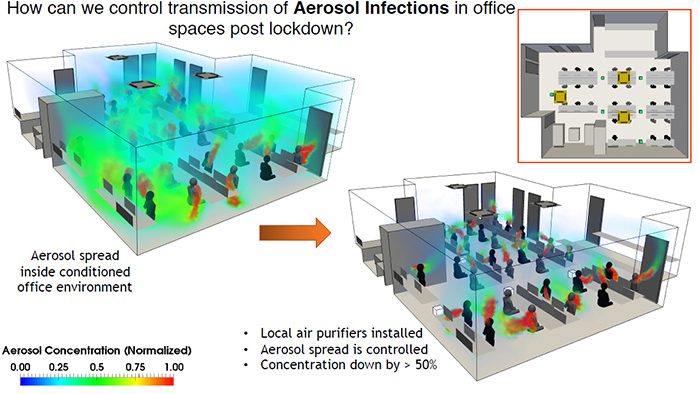 CoolSim is a CFD software simulation tool focused specifically on predicting cooling performance and airflow efficiency in data centers. This tool has been used to simulate the influence of a range of parameters on air circulation in enclosed spaces, such as air velocity, individual emissions over specific timeframes and cloud aerosol concentrations.

All buildings, Bemis explains, have a specified air change rate – the amount of air that needs to be changed per unit time, as specified in the U.S. by ASHRAE – the American Society of Heating, Refrigerating and Air-Conditioning Engineers. Building codes are based on these ASHRAE specifications, which correlate to the type of business, the number of people who will typically be using the room and its size.

Not all rooms, however, are well mixed in terms of air exchange.

“Just because there’s a specified rate of change per hour doesn’t mean that all the molecules in that room get exchanged,” Bemis points out. “It depends on where the diffusers with the inlets and outlets are positioned. We do CFD modeling of typical office environments, often for clean rooms for semiconductors, with which we can map the air coming out of diffusers and identify dead zones, because the diffusers are not hitting everywhere, and the air is not making its way back to them. In the home, the dead zones are where the dust always collects – low pressure areas with very low velocity. In a cleanroom it’s very important to identify them because you want to eliminate the areas for potential contamination completely.”

There is also the issue of how often air supply systems in public buildings are recommissioned.

“They may have the filters changed regularly, but they’re seldom checked to ensure the air change rate is working as required – assuming it was even commissioned in the first place.”

The localized nature of transmission is borne out by records of recent super spreader events.

One, for example, occurred in a small restaurant in China equipped with a wall mounted air conditioning system with the inlet and outlet on the same device and fairly coarse filter media. In this instance, a single diner infected half of the people in the restaurant, and they were all on one side of the room, leading to the conclusion that the direction of airflow from the air conditioning was the primary cause of the spread.

In another incident at a 19-story call center in South Korea, there were 97 confirmed cases recorded, and 94 of them were on the 11th floor – with all cases on one side of the room.

“The HVAC system was not unique to one half of that floor, so the transmission was very local considering it took place in such a large building,” Bemis notes. “Localized filtering would be a solution in eliminating the dead spots and provide the same effect as social distancing.”

VIDEO: Droplet movement within a room with people

On an airplane, passengers receive an average of 20 cubic feet of air per minute, and the air change rate is very high – between 20-30 times per hour, with 50% of the refresh air coming from outside the plane.

In addition, all planes use HEPA filters in a complex filtering system, with which the probability of removing 0.003-micron particles is 99.9%.

The first case of COVID-19 in Canada was linked to air travel by an infected individual flying from Wuhan to Toronto. There were 350 passengers onboard the 15-hour flight and the number of passengers who were infected during it was zero.

“You would think that someone with coronavirus on a plane for 15 hours would surely contaminate someone else,” says Bemis, “but they didn’t, not one. The virus was only passed on once the infected passenger was on the ground in Toronto. As far as further research is concerned, the great thing about planes is they have a manifest, so you know who’s on them and you can track them.

“I have only been able to find one case of multiple influenza infection transmission on a plane and that was back in 1970, and it turned out the plane was grounded for three hours, with its ventilation system inoperative due to engine failure.

“This gives grounds to conclude that virus transmission is highly correlated to HEPA filters and air changes, and it wouldn’t take much to make all public buildings and transport systems as safe as planes.”

Adrian Wilson is an international correspondent with International Filtration News. He is a leading journalist in the area of fiber, nonwovens and technical textiles. He can be reached at adawilson@gmail.com.

IAQ – from panic to awareness to understanding to herding cats