[EDITOR’S NOTE: For those of you who brought to our attention that we had the wrong R. Vijayakumar listed as the author bio on this article, we appreciate your attention to detail. The error was intentional to make sure you are reading to the end (tongue firmly planted in cheek). On a more serious note, we appreciate the notification, and we apologize to the real author, R. Vijayakumar, who is, believe it or not, from the same town as the fellow who we incorrectly listed as the author of this article. Updated: Sept. 25, 2020.]

HEPA and ULPA filters have been in use around the world for many years. The first HEPA filter was developed in the late 1940s. The original procedures to test these filters were also developed around the same time. Although these original test procedures are still practiced in the U.S., and required by many of the regulated industries around the world, several national standards have evolved since the 1970s to keep up with the advancement of the technology and the needs of the industry. Unfortunately, the prevailing national standards do not prescribe equivalent filter classes. In some cases, the methods themselves are not equivalent.

Since it is traditional to test every HEPA and ULPA filter and individually certify their performance and performance class, the lack of equivalence between current standards in use has created difficulties both for the manufacturer and the consumer. To rectify this situation, a new global ISO standard has been developed under the ISO TC 142: Cleaning Equipment for Air and Other Gases, which was published in 2011. Although having roots in the prevailing European standard, EN 1822, the new ISO standard, aims to encompass current practices of the major standards in use around the world. Hence, none of the practices or classifications of any of the existing standards are expected to become entirely obsolete by the adoption of this ISO standard. It is hoped that such an encompassing standard will be universally accepted, and thus eliminate the burden of compliance to nonequivalent standards presently faced by the industry and its consumers. The author requests feedback for consideration in the revision to the set to begin in 2016.

The first HEPA filter was developed in the late 1940s, mainly for military gas mask filters, and for the protection against the radionuclides in the nuclear industry. It is believed that the original HEPA filters were tested at a mass mean diameter of ~ 0.3 ╬╝m, since this was the size of the radionuclides of concern. HEPA and ULPA filters have been in use around the world since then. Unique among filters, HEPA and ULPA filters stand out by the requirement that each of them are individually tested and certified. These filters are tested for both efficiency and leaks when manufactured. Further, in regulated industries such as nuclear and pharmaceutical manufacturing, the integrity of installed filters is also tested in situ for leaks.

The original procedures to test these filters were also developed around the same time as the HEPA filters. Although these original test procedures are still practiced in the U.S., and required by many of the regulated industries around the world, different national standards have evolved to keep up with the needs of the industry. These original test methods are based on poly disperse aerosols with a known size distribution as they challenge aerosol, and photometric methods for measuring the total aerosol concentration, both for leak and for efficiency measurements.

Since the 1970s, with the availability of discrete particle counters, new standards for testing HEPA and ULPA filters have been developed around the world using particle counters to estimate the efficiency of filters at a specific particle size. Unfortunately, the several prevailing national standards do not prescribe equivalent filter classes and, in some cases, the methods themselves are not equivalent. For example, whereas some standards prescribe efficiency to be determined at the Most Penetrating Particle Size (MPPS) of the filter, there are others that prescribe determining the filter efficiency at a specific particle size, say 0.12 ╬╝m. The lack of equivalence between current standards in use has created difficulties both for the manufacturer and the consumer.

To rectify this state of affairs, a new global standard, ISO 29463: High efficiency Filter and Filter Media for Removing Particles in Air, has been developed. Although having roots in the prevailing European norm, EN 1822 (1), the new ISO standard has similarities to current testing practices and filter classification of the major standards in use around the world. Hence it is expected that none of the practices or classifications of any of existing standards will be rendered completely obsolete by adoption of this ISO standard. It is hoped that this standard will be universally accepted, and thus eliminate the burden of compliance to several nonequivalent standards that the industry and its consumers presently face.

Structure of the ISO Standard

As noted, the ISO 29463 is developed using the EN 1822 standard as the basis with revisions to accommodate the practices of other national standards from the U.S., Japan and others. The standard is divided into 5 parts:

Part 1: Classification, performance, testing & marking
In addition to the filter classes, this section provides the general guidelines for the use of the prescribed test methods and their basis in filter classification. The standard prescribes thirteen filter classes. These are shown in Table 1. 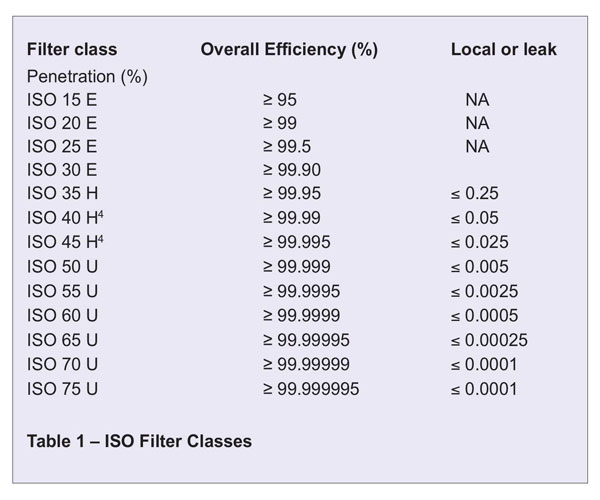 Part 2: Aerosol production, measuring equipment, particle-counting statistics
Any test method is only as good as the instruments used in the required measurements. Part 2 of the standard discusses the recommended instruments and particle generators as well as their minimum requirements for use in the measurements prescribed in the standard. Common instruments types used in filter test standards around the world are included in this section. In keeping with ISO and good standards practice, specific brands are not provided nor recommended.

Part 4: Test method for determining leakage of filter elements (Scan method)
Among test methods for filters, leak testing is unique to HEPA and ULPA filters. This section of the standard prescribes a normative method for all filter classes that requires leak to be determined at the MPPS of the filter. In recognition of prevailing methods in many parts of the world, the standard also allows two alternate normative methods for testing filter classes < ISO 40. One method common in the U.S. and pharmaceutical, military, and nuclear industries around the world uses the photometers and polydisperse aerosols. The other method uses the oil thread and visual leak detection procedure common in many European countries.

Part 5: Test method for filter elements
This section prescribes a normative method for determining the filter efficiency at its MPPS. Procedures for statistical sample testing of E filters are also included. In recognition of other similar but not exact equivalent test methods, the procedures as written will accept most of the other methods based on discrete particle counters in use around the world. This section also includes the efficiency determined from integrating the data from the scanning method in Part 4.

Similarities to other standards

Although the different national standards in vogue appear different at first glance, for the most part their methods for efficiency determination, when discrete particle counters are used, are based on similar approaches and instrument requirements. Although the ISO standard prescribes testing for efficiency at the MPPS, the tolerances allowed will permit current practices defined by major filter standards in use around the world to comply with the requirements defined in the ISO standard. For example, whereas the European standard explicitly calls for determining the efficiency of filters at their MPPS, the U.S. or Japanese practice specifies measurements at a particle size or size ranges that is close to the MPPS of modern filters. Further, in practice, this range will fall within the tolerance allowed in the European methods that has been carried forward in the ISO standard. Thus, for all practical purposes, these standards are nominally similar to the ISO standard and are expected to result in similar filter classes. A comparison of nominal filter classes between the U.S., European and the ISO classes are shown in Table 2.

The biggest challenge in developing any global standard for an industry that has a long tradition of national or regional preferences in product classification is to devise a classification scheme that includes all current classifications. For high efficiency filtration, it is traditional practice to designate adjacent filter classes that differ by an order of magnitude difference in filter efficiency. Most countries outside Europe use whole decimal percentage efficiency to determine the filter class, i.e., 99%, 99.9%, 99.99% and so on. In Europe, the tradition has been to use half a decimal percentage efficiency to determine the filter class, i.e., 95%, 99.5%, 99.95%, and so on. These two practices are reconciled in this standard by adopting classes based on a half order change in efficiency of the filter in adjacent classes instead, i.e., 95%, 99%, 99.5%, 99.99%, and so on. Although such a fine differentiation may be impractical, it does allow all current classifications from around the world to be included in the ISO classes. This approach also results in a larger number of filter classes. However, the expectation when the standard was drafted, is that since all existing classes are acceptable, it is expected that different parts of the world may choose to use alternate filter classes, either whole or half a decimal efficiency, to keep the familiarity in their respective markets intact. This approach is illustrated in Table 2, where the filter classes defined by the ISO standard as well as the European EN 1822 and US (IEST) standards (2) are compared. 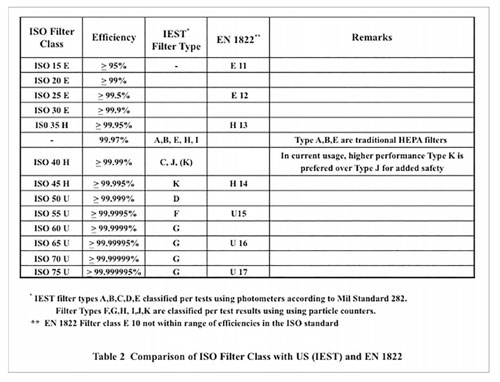 Divergences from other standards

Whenever an ISO standard is developed there is bound to be some compromises and normalization between existing national standards. ISO 29463 is no different. Although it attempts to be inclusive of all normative methods using discrete particle counters, methods that use other particle detection methods are not compatible with this standard. For example the photometric method, common in many industries in the U.S. and around the world, is based on a multiple particle detector and polydisperse aerosols. Similarly, the method using sodium flame and flame photometry is also not based on discrete particles. Both these methods have yielded valid results for many decades. However, direct equivalent data between them and the discrete particle measurement methods prescribed in the standard are not available at present. Perhaps when such data are available, these methods could be considered as alternate normative methods.

A new five part standard for sub HEPA, HEPA and ULPA filter testing and classification has been developed. The standard addresses filter classification, filter media testing, filter efficiency and filter leak testing along with the requirements for the hardware needed for testing. Being the first ISO standard for high efficiency filters with a global audience, the standard attempts to be inclusive of current national filter classification practices that are based on discrete particle counters. However, national test methods that rely on non-discrete particle measurements are not included for lack of equivalence data. They may be considered in a future revision. As with most global standards, acceptance of ISO 29463 is slow. With the upcoming revision, one expects wider acceptance.

Next Understanding the benefits & limitations of EPA filtration 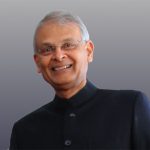