This is the first in what will be a recurring column in IFN called “Moon Shots,” highlighting calls for innovation and new ways of thinking in the filtration industry. If you would like to pitch your “Moon Shot” idea for publication in an upcoming issue of IFN, please contact Matt Migliore at mmigliore@inda.media or +1 919.459.3754. Special thanks to Hal Alper for developing this concept and authoring our first “Moon Shots” column, with a focus on a potential solution to the water/energy nexus challenge.

Energy production and water purification are inexorably linked in a dance of interdependency, ultimately resulting in generation and release of CO2 to atmosphere. Every form of energy production involves the purification of water as a requisite component or as a waste product to be treated before re-introduction to the environment. Fracking is one of the most obvious examples, but even solar consumes about 20 gal/MWH, often in locations where clean water costs more than gasoline.

Obversely, every method of water purification or processing requires energy, most of which is derived by the combustion of coal. Ironically, coal is an attractive option due to its relatively low water demand. Conversion to liquified natural gas (LNG) would reduce CO2 generation by about 50%, but “green” alternatives are not able to bridge the gap at present due to their discontinuous nature, resulting in the need to store energy.

It is not clear whether the energy and water required for fabrication and subsequent environmentally safe disposal of toxic batteries is a net gain in the long run. Power densities can vary a thousand-fold, with biomass the lowest at 0.8 W/m2 and LNG at the highest at 1000W/m2. Solar and wind require about 50X more space than coal and 100X more space than LNG. Conversion to renewable sources would consume about 10% of land mass.

This interdependency results in a feedback loop, with the greater demand for water resulting in more CO2 generation and exploiting sources of energy requires water. Overcoming this dilemma would be a quantum jump for the filtration industry and a positive contribution toward reducing climate warming.

NOTE: Much of what will be discussed below is based on work done by Dr. G. Pollack Lab at University of Washington (pollacklab.org).

A phenomenon that is prevalent in nature, but not much used in industry, is that of the tendency of self-same components to self-assemble into greater assemblages, resulting in emergent behaviors. This eliminates the need for energy intensive processes, which force the system to go against the grain and instead exploits what the system naturally wants to do. One example is the tendency of the base pairs comprising DNA to spontaneously form short-chain precursors of nucleic acid. Another example is the formation of the membrane like meniscus at the air/water interface. This is sometimes called the exclusion zone (EZ).

Spectroscopic and other measurements like falling ball viscometry clearly demonstrates that this is a separate phase of water. This membrane-like phase of water is a liquid crystal state and derives its name from the fact that even protons from the disassociation of water are expelled from the super-organized structure.

A potential difference can be measured between this zone and the bulk phase. Sunlight affects the formation of the EZ. It may be possible to use different frequencies of light to mediate growth of the EZ.

Radiant energy from the sun not only warms the water, which in turn warms the atmosphere, but also contributes to the formation of the EZ at every hydrophilic interface on earth, resulting in raindrops, insects which walk on water, and myriad other everyday phenomena that we take for granted. This zone also excludes a good fraction of common impurities such as particulate matter and salt.

Much like a magnet, division or separation of the EZ results in spontaneous generation of a new EZ. Removal and reformation of this phase could result in a continuous low-energy method of water purification.

An industry-wide effort to investigate and potentially exploit this property of water is needed, as success would go a long way toward reducing the dependency of water purification on fossil fuels. Two major areas of research are called for:

Achieving continuous separation and reformation of EZ water could be a revolutionary advancement in water purification.

Learning how to manipulate and control the EZ water could potentially contribute to producing clean, sustainable energy. One of the holy grails to achieving clean energy has been to be able to disassociate water using only sunlight, as plants do. All efforts so far have failed. Those efforts have all been with bulk water, not EZ water.

This might be an interesting area of research as the water in plants resides in capillaries and is most likely in the EZ form and not in the bulk phase. The plant does its chemistry with EZ water. We might get novel results if we did the mimicked this approach.

Accomplishing water purification by exploiting the tendency of water to spontaneously self-assemble into a liquid crystal devoid of salts and particulate matter is a tall order and would be equivalent to the “moon shot” in water purification technology. Just like the moon shot, it is going to take cooperation between groups who may be used to competing, and some fundamental work remains to be done in order to gain sufficient understanding in order to even attempt this endeavor.

A major area of interest is understanding the role biological organisms and their byproducts have in the observed behavior of water. We really only have a perfunctory understanding of what is in the water and how it may affect behavior. In 2009-2010 the Global Ocean Sampling Expedition headed by J. Craig Venter conducted a survey of numerous oceans around the world. The result was the discovery of millions of previously unknown genes and over 1,000 new genomes for uncultivated lineages of microbes. Most of these have never been observed; we only know them from their DNA, and we have no idea what role they play in the ecosystem or how they may affect the behavior of water.

Most engineers are not used to such considerations, but they are part of everyday phenomena. One example is the study of the effect rust and bunt spores have on freezing behavior (Haga et al.). The spores have been detected as much as 6 km high in the atmosphere and facilitate freezing by providing nucleation centers, essentially raising the freezing point of water. Water unable to nucleate supercools and freezes only at -40 C. There may be an evolutionary advantage to raising the freezing point as these organisms play a role in the decomposition of dead leaves.

Much like a magnet, division or separation of the EZ results in spontaneous generation of a new EZ. Removal and reformation of this phase could result in a continuous low energy method of water purification. An industry-wide effort to investigate and potentially exploit this property of water is needed, as success would go a long way toward reducing the dependency of water purification on fossil fuels.

Another example is illustrated by work conducted at Mycelx and at the Office of Naval Research (ONR). The idea was to study the fouling behavior of desalination membranes. In both cases, a drum of water was recirculated through a fresh membrane. Mycelx monitored the flow and dP, while ONR used fluorescence spectroscopy to detect the presence of Chlorophylls remaining in the water. After the readings were recorded a fresh membrane was introduced and the test repeated with the same water. The results were surprising. The same characteristic increase in dP and drop in flow appeared on each fresh membrane over numerous turnovers and the chlorophyll peaks remained indefinitely. This indicated to us that organisms that produce exopolysaccharides (EPS, a viscoelastic mucousy barrier substance surrounding the cell, one of the primary membrane foulants) were ubiquitous on surfaces in contact with the water and in the water. There was very little decrease in the fluorescence or other readings even after multiple changeovers. Although some microbes were certainly removed, it is quite possible that the remainder produced more EPS as this is a defensive barrier for the cell and would be triggered by the water becoming more hypotonic.

Shockingly, this behavior persists even when 18 MegaOhm water is used – this is the purest water we can make. The theoretically cleanest water will have a resistance of 22 MOhm – 18 is the best we can do practically – so it is remarkable that these organisms persist even in this environment.

The above is relevant for the present and future. In terms of the present, it has often been reported that 50% of the expense of desalination is due to organic fouling of the membrane. Regeneration of fouled membranes is destructive to the membrane and can only bring the performance back to a fraction of its unfouled state. Improving management of microbes and the EPS associated with them can result in immediate energy savings.

As for the future, some unsuccessful early attempts have been made to commercialize EZ phenomena. One of the problems encountered was inconsistency in ability to control the degree of formation of the EZ. This probably has to do with EPS impurities, at least in part. Once formed, there is still much work remaining to acwhieve separation and regeneration. 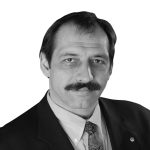 Haluk Alper, president and chief science officer for Mycelx Technologies, is an inventor of chemistries and chemical processes. He has developed numerous industrial products, formulations and compositions currently in use and holds more than 100 patents. He belongs to various distinguished professional societies and has published numerous articles on a variety of scientific and engineering topics. Dr. Alper’s primary interest is ecosystem preservation through industrial evolution. He can be reached at alperh@mycelx.com or +1 770.534.3118.

In the trends of today, we see the future of filtration

MANN+HUMMEL aims for ‘Leadership in Filtration’